This printed article is located at http://ekovest.listedcompany.com/financials.html 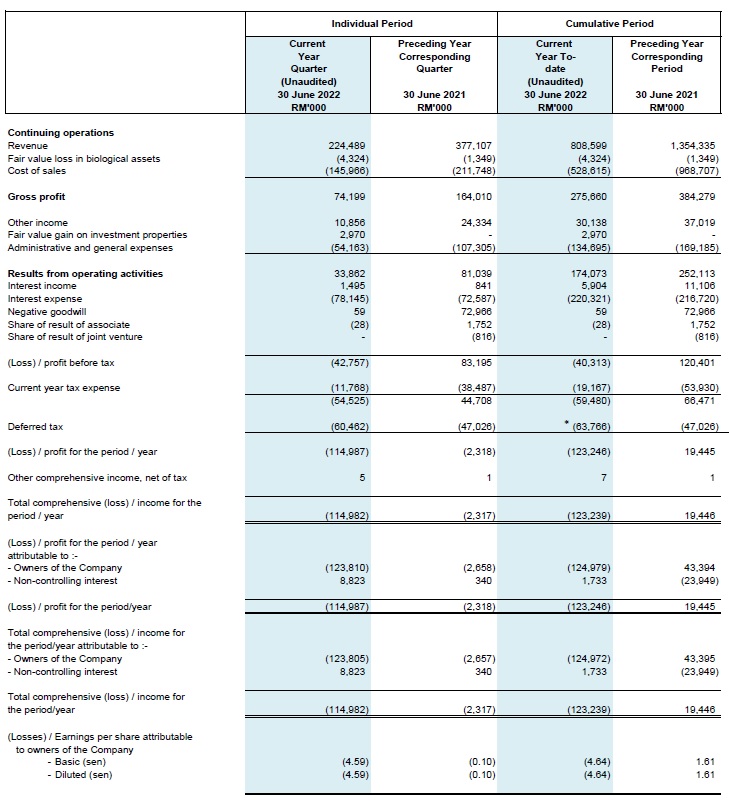 Condensed Consolidated Statement Of Financial Position
As At 30 June 2022 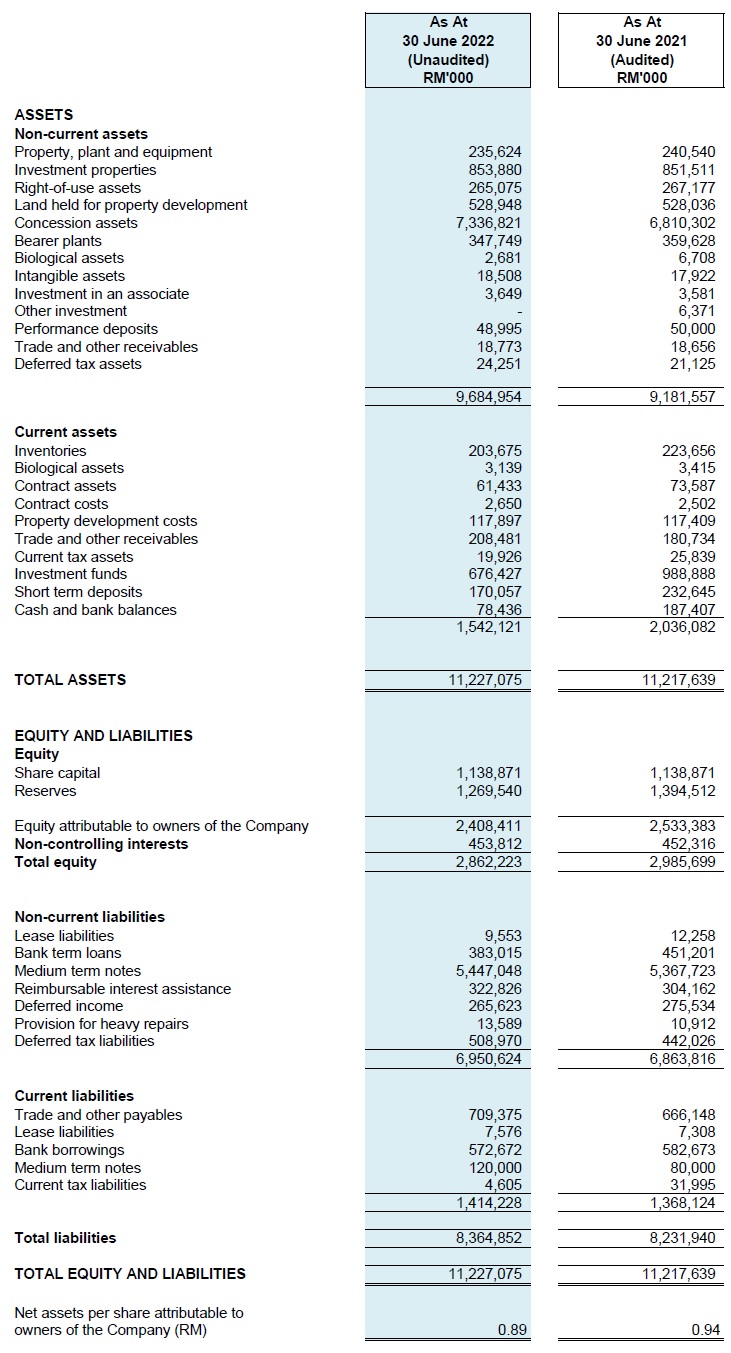 The performance of the respective operating business segments for the 4Q 2022 under review as compared to the 4Q 2021 is analysed as follow:

The construction sector reported a lower revenue of RM72.754 million for the 4Q 2022 as compared to RM288.519 million in 4Q 2021. Correspondingly, the gross profit has also decreased from RM118.211 million in 4Q 2021 to a gross loss of RM5.637 million in 4Q 2022. The decrease in revenue for the 4Q 2022 as compared to 4Q 2021 is mainly attributable to lesser construction activities at site due to the slower lead time for supply of building materials resulting from the various movement control orders (MCO) previously implemented by the Government. Furthermore, provisions have been made in this current quarter to reflect the anticipated higher cost of building materials post MCO, which has been affecting the entire construction industry.

The property development segment reported a revenue of RM11.915 million for this current quarter as compared to preceding year corresponding quarter of RM4.920 million. The revenue for the completed units in EkoCheras has improved with the gradual recovery from the transition to an endemic phase as compared to the preceding year corresponding quarter where tighter MCO restrictions were imposed. Correspondingly, this segment reported a higher gross profit of RM2.017 million in 4Q 2022 compared with RM1.818 million loss in 4Q 2021.

For the current quarter 4Q 2022, the plantation segment registered a higher revenue of RM44.835 million and a gross profit of RM10.118 million as compared with RM26.856 million and gross profit of 7.433 million in the preceding year corresponding quarter. The increase in revenue and gross profit were mainly attributed to the higher sales contribution from the oil palm plantation and the significant increase in Fresh Fruit Bunches (FFB) average selling price. Meanwhile, other divisons’ sales such as the durian plantation, contract farming and manufacturing and trading division have also improved during the period.

The relaxation of the MCO restrictions during the current quarter has resulted in an increase in our F&B division’s revenue as many industries have resumed their businesses and supported by consumer improving spending habits. The revenue for the current quarter increased from RM1.193 million in 4Q 2021 to RM2.846 million in 4Q 2022. Prior the implementation of NRP Plase 4, our F&B outlets were only operating take away services which has affected our revenue.

Property Investment and others

The rental revenue for the current quarter has decreased from RM7.652 million in 4Q 2021 to RM6.490 million in 4Q 2022 mainly due to certain tenants have discontinued and terminated their tenancies with Ekocheras Shopping Mall. These tenants were affected by the various movement control orders (MCO) previously implemented by the Government. Eventhough, lower rebates were given to the tenants as compared to the preceding year corresponding quarter, the continuing support to the tenants in various other forms were stll provided to ease the cashflows of certain tenants.

As part of our strategy to transform Ekovest into a larger listed conglomerate with a portfolio of diversified businesses, our presence in PLS has enabled us to venture into the management and operation of oil palm and forest plantations as well as in durian plantation, production, distribution and related businesses. This is in line with the long-term strategy of expanding and diversifying into other businesses to reduce dependency and reliance on our existing businesses in construction, property development and toll operations.

The Board remains optimistic in delivering positive financial results and expects the new construction project, which was announced on 5 July 2022 that the Group has accepted the Letter of Award as the engineering, procurement and construction contractor for the RTS Link Project with a contract sum of RM1.979 billion for the RTS Link rail works, to contribute positively to the Group’s future revenue and earnings starting from the new financial year ending 30 June 2023.

The Company is continuously working closely with Government on various infrastructure projects which has been proposed to the Government. The Board is hopeful that the Company is able to secure some of these projects and the Board will continue to review the financial impact and monitor any opportunity to launch new property development project for the Group. Barring any unforeseen circumstances, the Board is confident that each of the Group’s segments would contribute positively to the Group’s performance for the new financial year ending 30 June 2023.